To celebrate the 10th anniversary of TIGER&BUNNY, we again invite you all to cook up some fried rice! To grab some inspiration, you can check out the original event gallery. If you’ve never cooked fried rice before, we have translated Kotetsu’s own fried rice recipe.

How to take part:

The submission period will run from March 27th to April 3rd at 20:00 GMT. After the submission form closes, the pictures will be posted as a gallery for everyone to view. (We’ll have the gallery up as soon as possible, but it depends on how much rice you cooked!)

We can’t wait to see what you cook up this time! 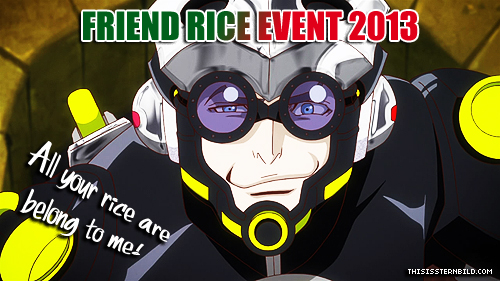 Thank you so much everyone who took part in our fried rice (and other good Tiger & Bunny themed food) cooking event! This year we got not only a lot of tasty looking fried rice, but also some amazing cakes and displays of awesome collections of Tiger & Bunny merchandise.

Let’s continue to support Tiger & Bunny in the future! And now, on to the pictures -> HERE. 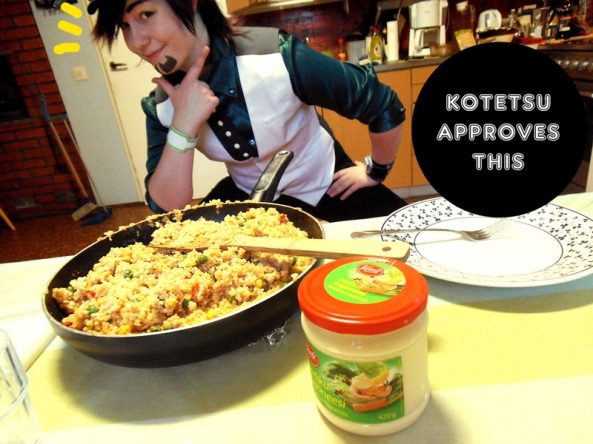 It feels like it was only yesterday but Tiger & Bunny really ended a year ago… This year’s Friend Rice Week wasn’t as hectic as last year’s Friend Rice Event, but we still got lots of pictures. This time we were open also for cosplay and fan art, so there’s a lot more difference in the pictures than in the previous event. Thanks, and thanks again, everyone!

We hope everyone had fun cooking – and eating! Let’s believe heroes and support Tiger & Bunny! 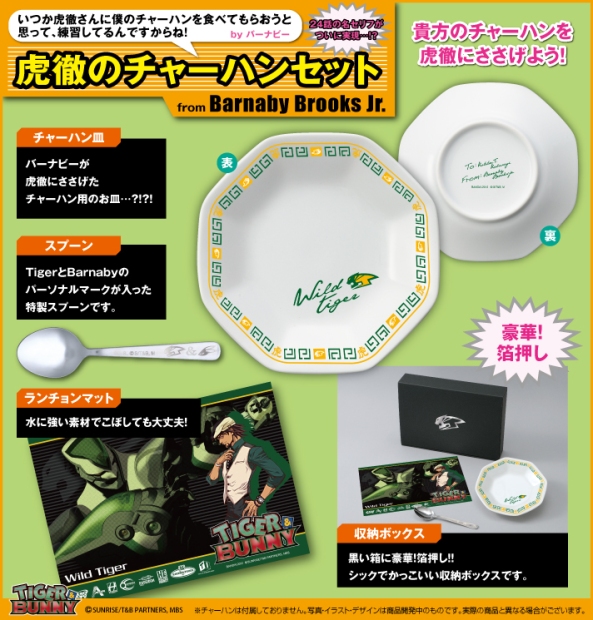 There are two things in Tiger & Bunny that one just doesn’t seem to be able to escape, and fried rice is one of them.

Recently, Bandai announced this fried rice set from Barnaby to Kotetsu that’s available on Premium Bandai. It was also featured in detail on Bandai Namco’s “Item Thursday” shopping program webcast, where the presenter read an excerpt from Nishida Masafumi’s blog post about the fried rice line in episode 24. Yeah, the same post that he made about Friend Rice Event Gallery. They didn’t mention the event itself in the program, but ever since then I’ve been wondering if the photos that everyone sent have contributed to stuff like this fried rice set being made. Rumour also has it that the planned Kotetsu and Barnaby Chibi-arts have fried rice plates as accessories.

The fried rice line is pretty popular also in Japan, it came in first among Barnaby’s lines in the King of Catchphrases poll that was held for Hero Awards 2011. And by the way, the Friend Rice Event Gallery still gets a steady daily traffic mostly from Japan. Like I was told on Twitter, maybe we have brought this poverty on ourselves now that they’re making all this fried rice merchandise. I regret nothing, even though my wallet has a seizure every month. Arranging the event was tons of fun.

Oh, the other thing you can’t escape?

Barnaby’s speedo. Just wait for Summer and there’ll be an official version of that speedo for sale and ready for sandy beach sandy beach~ ♪. I’m calling it. 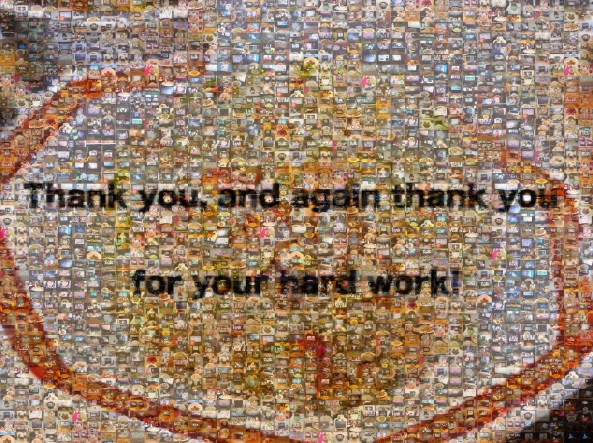 An amazing collage made of the Friend Rice pictures.

Whenever I do a big project that takes up a lot of my time, I feel the need to “write it off” after I’m done with it. It’s kind of a finalizing action to wrap it up all nicely and move on to other things. I think Friend Rice Event qualifies, since it ended up being way bigger than we expected. You see, there’s something we forgot…

“Do not underestimate anything that involves TIGER & BUNNY.”

We came up with the idea for the event in the middle of the night after watching episode 24. Aki wanted to make fried rice for episode 25 watch even though she had no idea how to cook it, so I said I’d make some too and serve it to Kotetsu and Barnaby and take a picture to post here at Sternbild. Aki wanted to do that too and then we thought it’d be fun if more people would join and send us photos of their fried rice with Tiger & Bunny characters. It really was a total spur of a moment thing that took us less than an hour to draft, make a banner and post. I thought that if we’d get a couple of dozen photos it’d already be awesome. Aki was a bit more ambitious and expected around 50 photos.

I was going to upload the photos and build the gallery only after the time was up, but by Tuesday morning we’d already received over 30 and the submissions were picking up speed. I realized I had to start working on it or it would turn into a mission impossible before we even hit the deadline. (It was a good decision. I’d been uploading and arranging the photos every day, so it only took a few hours after the deadline to get the final batch sorted out. That’s why we could publish the gallery so fast.) Then Japanese fans got interested in the event, too, so I decided we’d take submissions also on Twitter to make it easier for them.

A few people sent in cosplay photos, but we had decided that we wouldn’t accept those – the event was going to be about food and the characters themselves. We should probably have been more clear about this in the post, but since there were so few cosplay submissions, I think the instructions we gave were good as they were. There were a few photos I had to reject – some had food but no characters, some were inappropriate while trying to be funny. All in all, everyone really did their best for the event and it was exciting to see how creative the submissions were.

We received so many emails that we couldn’t respond to them personally. We really wanted to, because so many of you included messages also to me and Aki, telling how much fun you had with the event and cooking the food, picking the screencap to use, setting the table… Some of you even sent photos of yourselves cooking. Thank you, everyone! We’ve read every single message to us and we’re really happy you enjoyed the event so much.

I know that many fans are following the staff and cast members on Twitter. It has made me see them as people, not just detached names and/or voices on screen – maybe it’s the same with you? Our wish was to show the people behind Tiger & Bunny in some way that we really love the show, and that we appreciate how hard they worked on it, even when they were told to give up. It was amazing to see how many wanted to take part in the event and send in pictures. We knew that getting a reply was a longshot at best, but despite that we wanted to try and reach at least one of the creators of Tiger & Bunny to pass our message and the photos to them.

The response the gallery got when it was published was overwhelmingly positive. It was featured on at least three different otaku news sites in Japan (and I was getting worried we couldn’t endure the amount of traffic we got – roughly 40 times our normal daily pageviews in just 24 hours), but that was just the beginning. Our message was acknowledged by director Satou Keiichi himself, who posted his thanks on Twitter:

We thought that was all, and we were really happy that the gallery had reached Director Satou. But just like in the lyrics of Orion wo Nazoru it couldn’t possibly end there. You really can’t imagine our surprise in the afternoon when I checked the webstats and saw an incoming link from screenwriter Nishida Masafumi’s blog. It felt totally unreal and I think we cried a little, too, when we read his response and how moved he was by all the food everyone had cooked. He had been worried about Barnaby’s line about fried rice in episode 24, so this must have made the response to it even more touching.

…!! I wish to express my deeeepest appreciation for all of amazing lovely fried rice!!! http://t.co/91moprvE #tigerbunny

I'm so proud of citizen of Sternbild! To reciprocate your affection, I'd like to realize T&B CAFE in near future. Thanks, and thanks again!!

I know some Japanese fans who had been playing with the idea for Tiger & Bunny café, and personally I’m happy and excited that they’ll get to experience it. I hope we’ll get to see some pictures from there! (Anime theme cafés are pretty popular in Japan. Some are limited time events, some are more permanent.)

On September 18th, Executive Producer Ozaki posted on Twitter how Tiger & Bunny has fans all around the world, and how the series connects people despite differences in language and culture. Even if we don’t speak the same language well, we can still communicate, and in a way all of us fans are citizens of Sternbild. The event submissions were on the last stretch at the time Mr. Ozaki posted that update, and to me it felt really accurate and touching. The pictures we received were from all continents, after all. I’m betting I’m not the only one who’s made new friends from other countries thanks to Tiger & Bunny, and I’ve heard of Westerners starting to learn Japanese because of it, and of Japanese people wanting to learn more English. We’re proud of being among the amazing group of people that fans of Tiger & Bunny around the world are.

To everyone who took part in the event, whether it was in spirit or by sending photos: you made this happen. Thank you! And again, thank you!