Hey guyse? You remember last week when I predicted that this week all our carefully made predictions would be nothing but marsh gas? Well guess what? I was absolutely right about that.

This isn’t a complaint though. A week of suffering was totally worth what episode 13 served us and then some. If you want to prove us wrong, this is the right way to do it. We’ve seen this episode three times so far and I still don’t quite know how to reach a high enough level of coherency in my writing so I don’t embarrass myself. So, apologies in advance…

13. Confidence is a plant of slow growth
「信頼という木は大きくなるのが遅い木である」

The episode starts where the previous one ended, Barnaby is headed to his face off with Jake, Kotetsu is in the hospital, and city’s still held hostage.

Obviously, I was right about Jake having more than one NEXT power. He can use barriers and he can read thoughts, two skills that haven’t helped with his budding god complex. I was also partially right about Barnaby’s tears shown in the preview – he was crying because of desperation and impending defeat, but he hadn’t lost yet. Just about everything else I predicted wrong. We’d tossed around a lot of ideas how the situation might go, but things like Lunatic joining the battle never happened. Also, Kotetsu wasn’t in nearly as bad a shape as we thought he’d be…

Keith, Antonio and Ivan are all in the same hospital room with Kotetsu, watching Barnaby’s fight when Kotetsu too wakes up. And his first thought is to go help somehow despite being badly hurt, until Blue Rose practically orders him to come to his senses and stay out of the way, and try to think of a way Barnaby can beat Jake. At this point we were cheering at Kotetsu, but our bodies totally weren’t ready for what was to come. It was something we joked about while talking about what could happen but to actually see Kotetsu use his 100 Power to accelerate his healing so he could go help Barnaby made our jaws drop.

Let me just say that we are huge fans of Kotetsu. We love him to bits. And the way he appeared to give Barnaby the help he needed to take down Jake was more perfect than we ever imagined. When Jake’s finally pushed Barnaby to the limit where he has to activate his 100 Power to keep going, he’s still losing. But Kotetsu is there to catch him. And we mean, literally catch him. 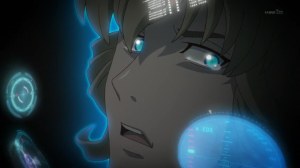 Kotetsu displays incredible wit and shows that he is a true hero despite all his flaws as he convinces Barnaby to use his tactic to beat Jake. This and the following scenes are all about restoring the lost trust between these two, and what I feared would turn into a bumpy road to understanding… wasn’t so hard at all.

Up until this point, for the past 20 years, Barnaby has lived for the sake of revenge and when he finally has the man who killed his parents cornered and is ready to deliver the finishing blow, he doesn’t. Whatever nonverbal communication goes on between Kotetsu and Barnaby, it’s meaningful enough to stop Barnaby from turning into a murderer and let Jake live – but not for long. Jake meets his maker in a last ditch attempt to escape when the beam he shot at Kotetsu hits the helicopter Kriem is piloting which then falls down and explodes on top of him. 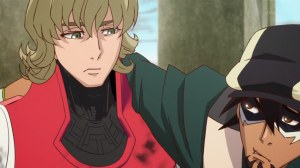 City’s saved, also with the help of Blue Rose, Dragon Kid and Fire Emblem (a.k.a. The Girls’ Team) who took out the exosuits while Kriem and Jake were distracted. Kotetsu and Barnaby are back to being a team. And this time even closer than before, because instead of calling him Old Man like he’s been doing so far, Barnaby now calls him Kotetsu-san for the first time when speaking to him. This may not seem like much to us Westerners, but for a Japanese person this is a sign of familiarity. Kotetsu seems surprised but also incredibly delighted, after all it also shows that Barnaby has acknowledged him as a partner.

What this episode title meant, then? Last week we wrote “…we think it’s more about restoring Barnaby’s faith in Kotetsu and their partnership. We doubt Barnaby will be able to catch Jake on his own, he’ll need Kotetsu’s help despite his pride getting in the way.” I think we had the correct idea, though it was more about restoring their mutual trust – both had to work for it.

Judging from our track record with the two previous previews (and because our heads are still spinning from the incredible speed the events turned this time) I don’t think we should try to make any predictions except that we should expect to expect the unexpected. The episode title “Love is Blind” doesn’t connect in any way to the scenes shown in the preview which mostly features Kotetsu and Karina plus some people who look like cosplayers, and then there’s this little thing with the image they have up on the official site for episode 14. Really, now? (But you’re looking mighty fine there, guys.) Maybe someday we’ll get a preview that is an actual preview and not misleading as hell but in the mean time it’s amusing to follow what kind of things people expect from episode 14.

There are some things that we still aren’t clear on that may play a part if the Ouroboros plot continues. We don’t know the details of Jake’s arrest or how the records of it disappeared. We don’t know how many members Ouroboros has and what they’re really after. It seems Kriem survived the fall from the helicopter, if this is so they now have a lead to Ouroboros. We doubt this is the last we’ll hear of those guys, and we are still quite suspicious of Mr. Maverick.

Well, whatever. Is it saturday yet?