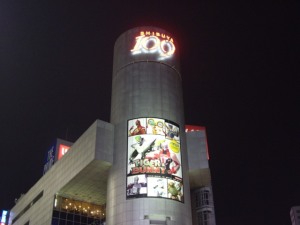 My internet was down for most of the day yesterday so the commotion this caused almost slipped past me. Yesterday, November 5th, a huge wall ad of Tiger & Bunny appeared on Shibuya’s landmark building, Shibuya 109. What’s remarkable about the ad isn’t that Blue Rose isn’t getting a bigger spotlight than she should anymore, but that it costs 13 million yen + tax for two weeks. The series is over, and although it’s currently on rerun on several channels, an advertisement like this is a bit too expensive to promote a rerun. The advertisement will stay in place until November 19th, so this might be a sign that whatever they are planning to announce at Hero Awards on November 13th is something big.

Something big, but what? We were expecting a continuation announcement already by final episode. Instead they announced NEXT Project – which by the way is a pretty brilliant way to keep up the hype while the continuation is planned, and whoever is handling the marketing for Tiger & Bunny at the moment is doing a pretty good job. They could be planning a movie, or a second season, or OVAS… Though if I had to bet, I’d put my money on NEXT Project Stage 2 – whatever it is – because I don’t think they are ready to put a S2 into production yet. I could be wrong though, but I remember Ozaki talking about “three steps” in NEXT Project somewhere – I just can’t find the quote for it right now, it could have been in some of the Japanese webcasts he’s appeared in.

By the way, the second set of official books (Official Hero Book 2 and Hero TV Fan vol.2) got pushed back three weeks from October 25th to November 16th. They’ll come out after Hero Awards 2011 event, possibly so they could include some promotion for what they’re announcing there. Even if we don’t get a confirmed continuation to the series yet, if they play their cards well they can keep us interested in Tiger & Bunny for a long time. After all, Hero Awards 2011 sold out in minutes and the live viewing event for it had even more theaters added recently.

We want more and Bandai wants our cash, so they’ll give us more… eventually.

7 comments on “Advertising for 13 million yen – but what does it mean?”