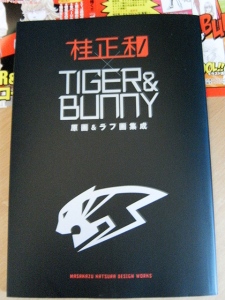 Tiger & Bunny’s character designer Katsura Masakazu‘s art book comes in two editions. What I have here is the Regular Edition, Limited Edition that comes out in February 2012 ships with original coloring version (as pictured on page 122 in the book) of S.H.Figuarts Wild Tiger. Limited Edition preorders have been sold out for months and it was made-to-order, so it’ll be hard to get unless you get very lucky and manage to snatch someone’s cancelled order. I have reviewed the extra goods that come with the Limited Edition here.

My camera battery went and died so some photos have been taken with a cellphone camera. They should still be clear enough to give an idea of what the book looks like.

I expected the book to be hardcover since the price was double than what the other Tiger & Bunny books have cost. Still, I’d go as far as calling the book “stylish” (I guess it’s appropriate since that’s how Barnaby describes himself in the manga one-shot). The paper isn’t as thick as in Hero Gossips but still high quality, and print quality is excellent. Overall design and art direction of the book is sleek and coherent, very easy to read. 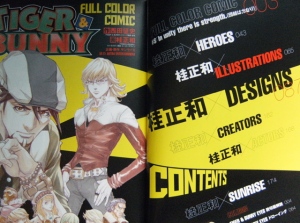 The main contents of the book are:

In Unity There is Strength (manga one-shot)

The manga that was published in Young Jump is included, in full color. First thing I noticed was that they had fixed the Hunbread Power typo. Although this felt kinda sacrilegious, the story does look better when colored and printed on proper paper instead of the cheap stuff they use for manga magazines. The overall color scheme could have been better – I felt there was too much brown, and more vibrant choices might have looked nicer. I have the Young Jump with the one shot, so I took a couple of comparison pictures while I was at it.

Apart from the manga, the book contains over 100 pages of Katsura’s original illustrations. There are colored sketches of the casual clothes and hero suit designs for the heroes, with comparison pictures to the anime versions. Also included are Lunatic’s, Scarf-tan’s and Agnes’ designs. (Katsura seems to like drawing Agnes, there’s a whole collection of her expressions on one page.) The illustrations section has lineart done for anime OP, blu-ray Limited Edition jackets, and some promotional art in full color. The blu-ray jacket illustrations go only as far as volume 5, so no spoilers about what the last two limited edition jackets will look like. It’s kind of a shame, I wouldn’t have minded waiting for this book a little longer if it’d meant they could have included all the illustrations for blu-rays.

The designs section is where things get interesting. There’s page after page of sketches of discarded ideas, doodles done during meetings, and lots of comments to them. There are detailed sketches of how to draw different characters’ faces and their expressions. It’s very interesting to see how the characters and hero suits came to be the way they are, and how Katsura draws the characters. Especially Wild Tiger has gone through quite an evolution, and I was really amused to see how many of the sketches had Tiger’s original hero name “Busty” scribbled on them. There are even designs for the Busty logo.

I haven’t read through all the commentary yet, just what caught my interest. There’s more text in the book than what it appears, most of it is in pretty small font to fit it among the illustrations. The commentaries include bits of information, such as who suggested what change and why. 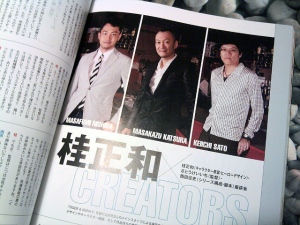 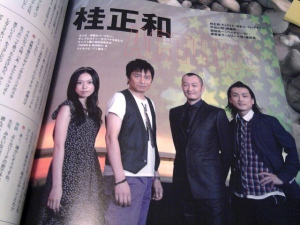 Well it’s not really a feature as such, but there were Zetman anime and manga flyers stuffed inside the book. I’m excite~ (Zetman is Katsura’s ongoing super hero manga, which I highly recommend – you’ll find quite a few things in it that are familiar to the designs in Tiger & Bunny. TV anime version is starting in April.)

I liked this book, and if you are a fan of Katsura’s art then I’d say that this is a must to get.