If you’ve kept your eyes on Tiger & Bunny before the series even started, you probably noticed that Karina Lyle a.k.a. Blue Rose was featured a lot in the promos, from posters to even the two minute pilot that was as an extra on the first BD. But along the way to the actual series, something happened and she’s sunk to the background, standing out no more than the rest of the heroes. She’s still fairly popular, scoring 9th place in the recent BIGLOBE poll though nowhere near the popularity the leading men of the series have reached. 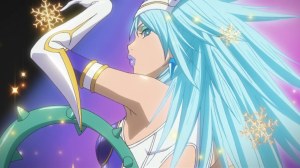 The pilot was obviously made pretty early. It features a lot of things that were changed to the actual series, like the setting being in the future instead of the alternate timeline, and Blue Rose’s design being different from the final. Still, she’s the first hero to be presented and named on it (although her name is misspelled) even before the actual main characters. The titular characters aren’t given names even though they put on quite a show to display where the sponsors can have their logos pasted. Seeing this, you’d probably think that Blue Rose would be the main character. But instead of being the teenage idol star of the show, she’s ended up as “just one of the heroes”. Maybe the series concept went through changes after this stage, and Blue Rose was set aside in favor of the main duo. Maybe she was there just to appeal to possible sponsors. Whatever caused her to turn into a wallflower, it’s been severe enough that even the TvTropes recap page for Tiger & Bunny feels it necessary to point out that “the woman in the corner [of the poster] is Blue Rose”. That’s pretty sad. 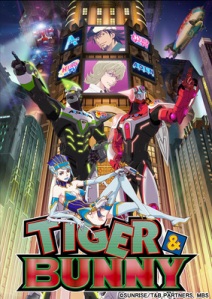 The logical reasoning why she’s plastered on all the promos is that she’s the only female hero that fits the bill of bringing some fanservice to a show with an otherwise powerful male cast. Pao-Lin is a bit too young and a tomboy, and Nathan is well… not really well endowed in the areas you’d need for the kind of fanservice Blue Rose can provide. We think that they could have been smarter about how to go about using her in advertising the series. If you look at one of the promo pictures (to the right) she seems out of place lounging on top of the series logo, as if she was added there as an afterthought. Wild Tiger and Barnaby’s color schemes were designed to compliment each other, she makes the picture clash. Even as a fanservice character she’s not utilized as much as you would expect. Her outfit is pretty revealing, but where many other anime would have a field trip with a character design like hers, Tiger & Bunny shows a remarkable lack of pantyshots and other camera angle play. And it seems that her chest has actually shrunk a little during the progress of the series, when it wasn’t that huge to begin with.

Karina appears several times on the preview for episode 14 but looking at the treatment she’s gotten so far, we’re betting on this being just a gimmick and a reminder that “hey guyse, there’s a female hero, too!” We feel kind of bad for her since she really is a great character. She has a good attitude, she’s no damsel in distress (despite her favourite getaway of Cutie Escape), and she does well as a hero (in the first episode when they announce the MVP she’s shown on second place after Sky High) although she has had some doubts whether or not she wants to continue. She’s also almost surprisingly level-headed for a girl of her age (which is still unknown but she’s probably around 17-18), lecturing Kotetsu a few times. It’s hinted in the series and made clear on the drama CD that shipped with the second BD that her sponsors are responsible for her image as a hero. She doesn’t enjoy her public image as a dominatrix, and gets flustered by some of the questions the listeners have sent to her in the radio show she does on the drama CD. If anything, the lack of in-your-face fanservice and presenting her private image as a normal girl with dreams has made her even more likeable to a wide range of viewers. Her characterization makes her feel more real and she’s pleasing to the eye of the male audience without annoying the female audience at the same time. 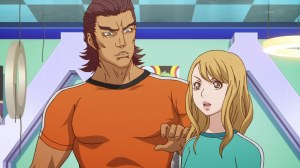 BSoD moment when Karina finds out Kotetsu has a daughter.

As for the possibility of her being promoted as a romantic interest on the second half of the series goes… we think it’s pretty slim. She’s got a crush on Kotetsu (and so does 99% of the fandom so she has good taste) but to us it seems more like puppy love than anything serious. Kotetsu is old enough to be her father and he seems to consider her just a fellow hero. (And if she absolutely has to be paired up with someone, we have a better suggestion than Kotetsu – but that’s just our opinion!) We’re sure that some people are feeling that the series lacks romance, but it’s perfectly possible to tell a great story without adding a grand American style “man meets woman” love story. Romance doesn’t automatically make a series better, and in this case we think it might drag the plot down.

It’d be awesome if she got a bit bigger part in the upcoming episodes. The impromptu “Girls’ Team” from episode 13 has a lot of potential for fun scenes and it would at the same time bring out the other girls more. Kotetsu and Barnaby’s popularity is already so overwhelming that the other characters need some love, too! 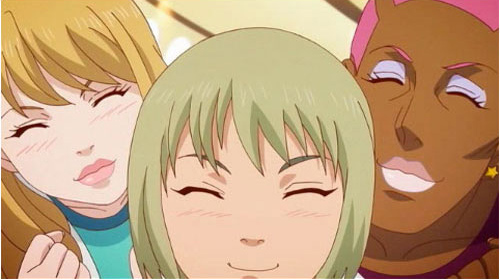