It looks like they saved what budget they could for this final stretch (or maybe the studio gave them some extra funding?) because this week’s episode looked really good.

It seems that this week’s title referred not to misfortunes piling up on a single person because everyone’s having something to deal with – heroes are locked up, Kotetsu and Barnaby are facing Black Tiger and Kaede has been kidnapped.

Now before I go on with this, I’d just like to point out this conversation we posted a few weeks ago when things looked really grim:

Well, Aki wasn’t off the mark. ヽ( >∀<)ﾉ I guess the more you mess with someone’s memories, the easier they are to fix since all it took was a nickname. I kinda had a hunch something like this might happen since in last week’s episode Kotetsu systematically called Barnaby only by his actual name and not Bunny.

Also, may I just say “lolspoilers”? Because the boards have been full of spoilers contradicting each other, . Actually, this one was true! Maverick deleted Barnaby’s files from the database, erasing him as a hero, it just didn’t register as “death” with us at first. (Thanks for pointing that out, Emily!) There are a ton of spoilers I’d like to believe to be true, but looks like the rest of this ride is going to be flown blind unless the new magazines coming out next week have any hints. (Newtype October issue is supposed to have a feature on the final episode.)

“Did you just call me Bunny-chan?”

Kotetsu is finally making progress with his issues and actually talks about things seriously. We saw it in the previous episode when he apologized to Kaede for lying to her, and this week it was his turn to tell Barnaby that he’s important. Although his first idea of slapping Barnaby again wasn’t really the brightest, even if it was very characteristic of him to just act on impulse. I don’t know about others, but we sure shed some tears here when he talked about what their partnership meant to him.

Another thing I suspected might happen with restoring Barnaby’s memories was another 180 degree spin where a hopeless situation suddenly gets turned around completely. I was holding back on hoping it’d happen because Tiger & Bunny is really good at making us suffer. But then it really did happen.

Barnaby was acting pretty composed after he snapped back to his old self, this could be possibly due to memories coming back gradually or it might also be that his subconscious has already dealt with the shock for now. It might well come back later, but since he’s got something he can focus on right now – taking down Maverick and saving Kaede – he’s not going to lose his head. The flashback scene to Barnaby’s childhood and his father reading a story about a mountain giant that protected people, and his mother’s words about how they’d protect him forever and ever seem to be giving him the resolution to protect what’s important to him now.

Nishida said in the interview that was printed in Official Hero Book that two characters would unexpectedly team up, and it turned out to be Ben & Doc Saito as the not-so-trustworthy spoilers said and many people speculated. Turns out that Saito got his memories restored by watching the TV broadcast where Kaede activated the power she’d received from Maverick. Agnes had her back to the monitor when it was shown on the broadcast so she still thinks Kotetsu is a murdere as Saito found out when he went looking for help. He turned up at just the right moment to help Kotetsu and Barnaby, first I wondered how he knew where they were but the bikes and Tiger’s suit probably have some sort of tracking device. Well, the bikes are now swimming with fishes (and Mr. Lloyds probably doesn’t like it but can’t quit anyway). 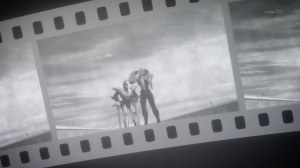 Saito was suspicious of Barnaby’s black suit since he didn’t design it, and we saw it had at least a direct video feed to Maverick so who knows what else might have been built into it. Later when Tiger and Barnaby encounter Black Tiger, Saito seems totally shocked to find out it’s a battle android and says that it’s impossible. All we know of robotics within the Tiger & Bunny universe is what we’ve learned from snippets of Barnaby’s parents’ work and the Cis incident, so there’s probably more to this if Saito’s reaction is anything to go by.

(I am so weirded out hearing Saito speak normally through the megaphone hat. Wonder why he didn’t use it earlier.)

This is the droid you’re looking for

Personally I was a

bit surprised to see Rotwang again although we fully expected Black Tiger to be an android. Rotwang was a bit short on marbles – that’s the impression I got from him – but maybe that just makes it easier for Maverick to deal with him. We’re wondering a bit just what the new H-01 aka Black Tiger is capable of, since it beat the other heroes so easily. It could be also that they’re not as used to working together, unlike Kotetsu and Barnaby who have been teaming up for a year. Maverick still doesn’t seem to want to get his hands dirty since he’s left all the bomb collar stuff for Rotwang to explain. The set up is nothing new, but it’ll be interesting to see how the heroes get out of it, since they can’t use their powers and one person flipping the switch will kill the others. It should be noted that Rotwang seems to hate NEXTs so he probably wouldn’t be interested in working with Maverick if he knew about his NEXT powers. It’s possible he’ll turn on Maverick if he finds out. 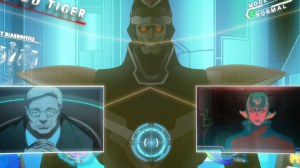 We’re not quite able to follow Maverick’s logic here even though we’ve speculated a lot about the reasons why he started Hero TV in the first place. We assumed he might have done it to help the NEXTs, but trying to reason this whole “androids for heroes” doesn’t compute if we think it from the pro-NEXT angle. This would also mean that Ouroboros definitely isn’t that “a certain organization”. The most logical angle to approach his scheme from would be making profit. He wants to make money and he doesn’t care where it comes from, whether it be other NEXTs or androids. The ease which he tosses Barnaby aside and deletes his information shows that he treats Barnaby as nothing more but a product – an item that is no longer useful. But we have this nagging feeling that we’re missing some detail about Maverick and his motives, and once we learn it the whole picture will make sense.

Stuff to wrap up

Things that should be resolved before the final ending credits roll:

It seems like a lot but since the series was planned to be self-contained they must have a plan to pull it off. Let’s believe Satou to make more twists in the last two episodes. Meanwhile, we tried to come up with new stuff to call for the finale…

…which turned out to be more challenging than we expected.

No Scarf-tan this week, shocking I know! Instead, have an obligatory speedo photo shoot shoop, because everyone loves Bunny in speedo, right? See ya! 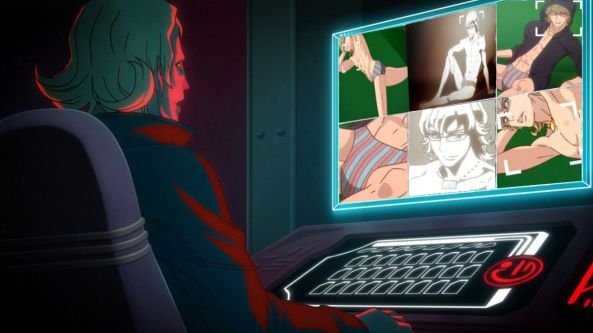