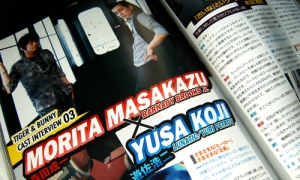 Hi guys, it’s Aki, the member of Sternbild who has some huge Internet-related problems right now! New translation entries might be late because of that.

Anyway, today I have for you a very funny and adorable interview with Morita Masakazu and Yusa Kouji (Barnaby and Lunatic). You can find it in the first Hero TV Fan book.

Q: Heroes with different points of view – Kotetsu and Barnaby, and Yuri (Lunatic). What do you think about them?

Morita: Kotetsu is a veteran, a skilled hero, the type you don’t usually see in manga and anime. I really sympathize with his desire to never lose the part of him that makes him a hero. He wants to show that not only the young ones can be heroes, and I think it appeals to all fathers around the world.

Yusa: As a hero, Lunatic is a bit special, but what really impresses me in Tiger&Bunny is the fact that all the heroes feel really human. Especially Kotetsu and Barnaby, it’s outstanding how the differences between an older man and a child of today show in this production. I find it interesting. 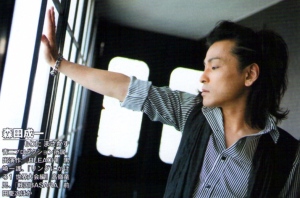 Morita: Child of today, huh. Fits! (laughs) I play as Barnaby, but I was born in the Shōwa era, so I think I understand Kotetsu better than Barnaby. I think Barnaby’s coolness partially comes from the fact that he’s always trying to think logically. I myself can remember times when I couldn’t understand the logic behind the actions of some people born in the Heisei era (laughs).

Yusa: That was so ojisan of you, you know (laughs).

Morita: Well you can’t blame me, I was born in the 47th year of the Shōwa era! (laughs) Barnaby’s pretending to be an adult, but he’s a character with a lot of childishness left in him.

Yusa: Psychologically, he isn’t that different from Blue Rose, I think.

Q: Tell us what you think about Yuri (Lunatic).

Yusa: I think he’s a person with a one-track mind. He always thinks about his “justice”, and the result of that is the birth of Lunatic – the one who judges the evil ones. I think he might be doing all this because there is no capital punishment in Sternbild. His way of thinking is different from Kotetsu’s, who believes people should be saved even if they’re criminals. I think they’ll cross paths again soon.

Q: There is a confict between Kotetsu’s team and Lunatic, but it wasn’t shown after episode 8.

Yusa: Up to episode 13 the main focus of the story was Barnaby’s fight with Jake and him achieving his goals – and, at the same time, the growing relationship between him and Kotetsu. Lunatic simply wasn’t needed. But to be perfectly honest, I didn’t expect that I wouldn’t appear at all. (laughs) What would have I done if this had continued and they only had contacted me again to invite me to the celebration party after the end of this project?

Morita: If that happened, the party would go down in blue flames… (laughs)

Yusa: Oh, so I’m still on the show because people actually feared that! (laughs) But I got more lines, the confict between the heroes and Lunatic is still on, along with their different views on justice and on being a hero. I think it’s time for this story to change into something on a more fundamental level, so to speak.

Morita: In the show, the basic „justice” is the one built upon the law, or to put it differently, the one that was born out of the citizens’ values. Kotetsu and Barnaby both try to protect that justice. However, there are times when it’s hard to agree with some things decided by that law. The „justice” represented by Lunatic is different – he wants to bring an end to criminals the law can’t reach. Just like Yusa-san said a moment ago, when Lunatic appears together with the heroes, the difference between their way of thinking shows really well, I think.

We tease because we love.

Q: Which parts of the characters you play would you praise?

Yusa: Are you serious! (laughs)

Morita: Red is a proof of being a hero! I think the fact that he wears a red suit tells everything about his coolness! (laughs)

Yusa: (laughs) How about something else?

Morita: There is one thing that bugs me a lot. I mean, usually, Barnaby wears glasses. But when he’s in his suit, he takes them off. So basically, he’s faking, right.

Yusa: Uhuh, it would seem so.

Morita: Well, the fact that he wears fake glasses means he’s a bit mischievous, right? I’m totally praising him for that! (laughs) Let’s move to Lunatic.

Yusa: To put it clearly – I like the fact that he has no sponsors!

Morita: Well, that is kind of cool (laughs).

Yusa: Oh, and I like how strong the power of his spirit is! People tell him Lunatic has no connection with other heroes, that he only appears for two seconds in the opening, and that he’s barely seen, and yet he doesn’t even tremble under their harsh words! (laughs) And I like how rich he is. I mean, he must be, after all he burns his cape every single time!

Morita: (laughs) I wonder how he makes his suit.

Yusa: I think he buys the right materials at Akihabara and makes it himself?

Yusa: I think that’s why the design of his mask and costume show his principles so well! (laughs)

Q: Is there something in Barnaby and Lunatic’s life that left a special impression on you?

Morita: The fight with Jake in episode 13. It showed how strong Barnaby can be, I was really happy. Besides that, episode one. I really like Barnaby’s “You are too old-fashioned” line. Felt so fresh, it’s still engraved in my heart. It’s not something you’d tell to your senpai – and especially not if he’s a hero, too! (laughs) “Is it really fine for this guy to become a new hero?”, I thought. I think it’s interesting that Barnaby’s a hero, and yet, has his private life. I can totally imagine him saying something like “End of work, so I’m going home”. I can’t really fully understand the cool part of his personality. (laughs)

Yusa: I like the times when Lunatic shows his overwhelming power, proudly displaying his own sense of justice! Or at least that’s what I want to say. I mean, besides that, there isn’t much of Lunatic’s “life” to talk about (laughs). Personally, I was really impressed by all the little moments when the heroes, like Origami or Blue Rose, show just how human they are. Oh, and the bomb incident from episode 3, when Barnaby takes care of the bomb thanks to his power play display. He’s really cool, but leaves even stronger impression when he’s together with Kotetsu. But the more he hangs around Kotetsu, the more similar to him he becomes. His face should get red sometimes, though, just to match the color of his suit! (laughs)

Morita: Dear fans reading this interview, you are so going to think we’re bullying Barnaby, aren’t you. You’re wrong. We tease because we love. (laughs)

The change that comes around after episode 14

Q: Morita-san, you announce the next episode in a fluent English, don’t you.

Morita: Fans often tell me that I must practice a lot, but the truth is I only do this during the recordings. I thought that I’d be able to do this correctly, more or less, but I was so wrong. (laughs) First, I thought the key is to remember the right pronounciation, so I used this feature on my mobile phone that allowed me to hear the english pronounciation of some words, but it turned out that this pronounciation itself was wrong in some places. (laughs)

Q: In every preview for the next episode, there is always something like “Hey, I’m x, the one who does y”, but if there was a version for Lunatic, what thing you’d say?

Yusa: “I’m Lunatic, the one who puts milk in his coffee!” or something like that. (laughs) But really, from his dark image, I’d say he should drink his coffee black.

Yusa: But if he really was saying previews for the next episode, the whole thing would end before he managed to finish all the lines.

Morita: Sounds about right. (laughs) Because he speaks really slowly.

Yusa: If he spoke fast, the power of his delivery would disappear, though. (laughs)

Q: As for the last question – after episode 14, Tiger&Bunny welcomes new plot developments, so could you tell us what should we look forward to?

Morita: There is a 10 months time gap between episodes 13 and 14 and lots of changes in the characters’ relationships. There are big changes, but then again, some parts didn’t change; there are good and bad changes… I think fans might try to focus on them.

Yusa: You should definitely look forward to see just how the relationship between Lunatic and other heroes will shape in the future. Lunatic himself is a being wrapped in mysteries, but whether they’ll see the light of the day is up for you to see. As for me, I’m interested in Blue Rose’s feelings towards Kotetsu.

Yusa: I wonder if it’ll continue till the last episode?

Morita: Well, it’s rare to see a love story like that in Tiger&Bunny. (laughs)

Yusa: Oh, also, I wonder if Rock Bison will get some spotlight… (laughs)

Morita: Taiten-san sometimes adds little stuff like „Moo!” and „Uttsu!”, so I think he’d be happy if the fans noticed it and replied him somehow.

Morita: This time, Taiten-san frequently adds some cow-related ad-libs, too, so pay close attention to him!

Yusa: Yes, please do that! Because Taiten-san can do things no one else can do!

Error: Twitter did not respond. Please wait a few minutes and refresh this page.