Not a week has passed since the battle for Wild Tiger MG Figure Rise and once again we have an announcement from Tamashii Nations regarding the upcoming pre-orders for Chibi-arts Barnaby Brooks Jr., S.H.Figuarts Lunatic, and Half Age Characters set. The pre-orders will open on April 3rd at 16:00 JST as usual. I don’t think I need to say how hard this battlefest is going to be with three “Do Want” items going up at the same time. 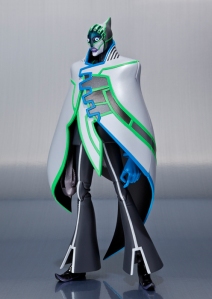 Lunatic’s figuarts comes with some great accessories – a set of flames for his eyes as well as his hands, and a flaming crossbow. The crossbow can also be folded and placed in his holster. His cloak also seems to be removable. Lunatic is going to be a standard release retailing for 4,725 JPY with a July release date.

Barnaby’s chibi-arts will include: At least two different facial expressions (tsun-tsun face & smiling winking face), and his pink birthday bunny. I am still checking various sites to get more information regarding his packing and price. The most current information that I have been able to obtain is that Barnaby is expected to be released in July.

Is everyone prepared for this triple threat battlefest? I will have my GOOD LUCK mode armor on and my finger ready for the repeat F5 attack. One thing is for sure, this battle is going to be very tough.