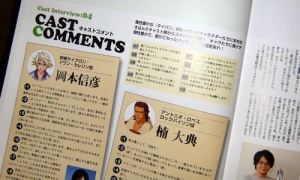 Hi guys, it’s me again! Both Hero Gossips and Roman Album got delivered safely to our greedy hands, so I have more translations for you today.

This interview was published in the Roman Album, and consists of eight questions each of the interviewed seiyuus answered .

Hirata, Morita, Kotobuki & Inoue (Kotetsu, Barnaby, Karina and Keith) didn’t answer these questions because they had full interviews, also published in the book. (Inoue’s interview can be read here, and the abridged version of Hirata & Morita interview here, translated.)

10 comments on “Cast comments from the Roman Album”