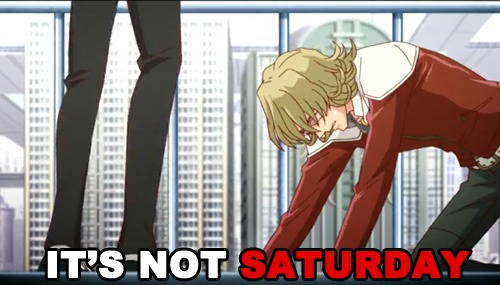 What happened to my Saturdays?

First Saturday that is not Superhero Saturday in the past 6 months was yesterday. It just felt so wrong and… not Saturday at all. It also feels really weird to not write an episode post on a Sunday. On the other hand, it’s not like this is over yet.

I’ve seen a lot of disappointed comments about continuation – whether movie, OVA series or S2 – didn’t get announced yet. You have to take into account that these things do take quite a lot of time, and even more so in the case of Tiger & Bunny. Japanese corporate bureaucracy can be pretty slow, and no one expected the series to be hit. If you take a franchise like Gundam or Sengoku BASARA as comparison, they have existing fanbases and are pretty much surefire sellers. The studio can plan for S2 even before the first episode of the first season has aired, and have things ready to roll the announcement out by the end of the series. Many staff&cast members may also have signed up for other projects – they can’t just sit around waiting and hoping for a continuation – so there’s the issue of scheduling. I think it was Nishida who mentioned in an interview the other week that when/if a continuation is made, the earliest a movie could be ready would be 2012, and the earliest S2 could be ready would be in 2013.

In the mean time, the series will start reruns on Japanese TV in October. The schedule was updated on the official site yesterday (sadly no Saturdays).

No idea how good these time slots are because I don’t usually watch these channels. The BS11 time slot seems pretty primetime, though.

Stuff to tide us over

There’s plenty of stuff to keep us busy for the wait, although no doubt things will slow down a bit also here at This is Sternbild. We’re determined to do our best during the wait, and with two manga serializations, manga anthologies from three publishers, official books, BDs and their drama CDs, soundtracks and character songs, merchandise, figures… Well you get the picture, we’re not running out of material just yet!

The release dates list has been updated, too. There’s finally Katsura’s art book as regular edition available for preorder, and the Tiger & Bunny Character Song Album (name subject to change) is also available for preorder in some online stores. No word yet of what will be on the CD, and the only confirmed artists are Hirata as Wild Tiger and Morita as Barnaby. (Please let there be another duet!)

The end of September is going to be pretty busy with books, the first two manga anthologies from Asuka Comics are already out (mfw mine were supposed to ship already on the 22nd, but they didn’t get collected by Japan Post until the 24th). TIGER & BUNNY GO! GO!! 1 anthology from Movic should be out on the 30th. Both Roman Album and Hero Gossips are coming out next week. Hero Gossips has been really popular on preorders, by the way. It was sold out even on Amazon Japan when I checked a few days ago. I’m really looking forward to my copy, the contents look like it’s gonna be the most bang for the buck when it comes to information about the characters.

Information from the source books should start trickling in soon, so even though I’ll probably have to wait a week to get mine there’ll surely be tidbits to keep us busy until the mailman comes.

Until then, see ya!

10 comments on “Calm before the storm”