Cover of Otomedia with T&B feature.

I don’t usually post stuff I can’t confirm first hand, but since these are from October’s magazines I figured it’ll be all right.

Click the cut for the stuff I’ve managed to find so far (mostly from Yaraon and /a/). I’ll keep updating with more stuff as it turns up.

Most of these are from Animage (I think):

Blu-ray news and other stuff: 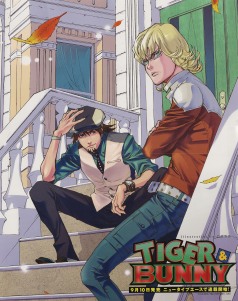 About the Newtype Ace manga:

From an interview with producer Kazuhiko Tamura:

From the interview with Nishida:

More from the interview with Nishida, about characters:

No idea which magazine these are from:

(Most of the translations from /a/ with minor edits for prettying it up.)

28 comments on “Magazine spoilers for the finale (Updated)”