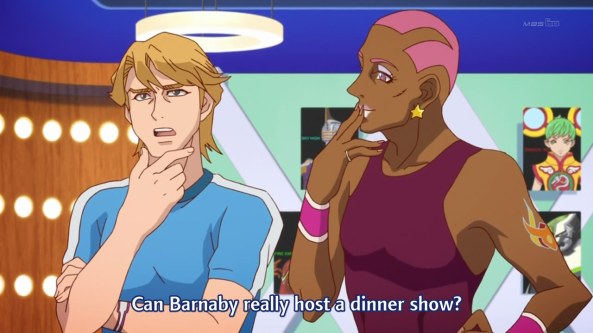 Hello! I’m derpchan, the member of Sternbild who has more time to kill this Superhero Saturday. Tiger & Bunny airs 20 minutes later than usually, and it may be even further delayed due to sports. So in the mean time, I thought I’d post this thing me and Aki discussed earlier this week.

How to cook up a success, Tiger & Bunny style

Step 1: A studio that doesn’t believe in your project and just wants you to fail.

Sounds harsh but that’s the reality Tiger & Bunny had to deal with. Ozaki hinted in the Tiger & Bunny panel from Otakon that it had been really hard to get the project off the ground. Despite this, the care and planning that’s gone into creating Tiger & Bunny is extensive, from the environments to character designs. There was a huge merchandise void at first because who would make merchandise for a show that’s not expected to sell at all? Same trend is in the BD/DVD sales that are lower than they could be because the print amounts can’t meet the demand.

As a result of the studio’s uncaring attitude and lack of interest in controlling the production, you can witness Sunrise’s animation D-team’s work in most episodes, from the occasional derps to all out QUALITY gym. And a whole bunch of rookie animators can now add the biggest surprise hit of the year (possibly even the decade) to their resume. And the reason they can do that is because of…

Step 2: A director who is a total BOSS.

In my opinion, getting Keiichi Satou to direct Tiger & Bunny was one of the key factors to why it succeeded. He wasn’t really that big of a name, though he’s been on the industry for years. His most notable work before Tiger & Bunny is probably Karas which he created and directed. It was far from mainstream (the first half is actually pretty cryptic) so that shows he’s not afraid of taking risks. I don’t think he’ll be known as “that Karas guy” anymore, though. Why Satou was so important to Tiger & Bunny making it big was that he allowed that team of rookies a lot of creativity. Many of the “random product placement” items that you can spot in the series were put there by the animators. Also, Satou was the person who wanted to hire…

Step 3: A screenwriter who has never done anime before.

Masafumi Nishida was Satou’s choice for screenwriter. Nishida explains in an interview that Satou specifically wanted “drama-style dialogue” for Tiger & Bunny. Nishida was an incredible and brave choice for the show, and he’s also the reason why Ivan photo-bombs, why Keith is the King of Moe, why Nathan is everyone’s big sister and… In short, he created all the quirks the entire cast of characters has. Because the characters turned out so life-like and genuine, it’s given a prime chance to test their limits to…

Tiger & Bunny has several well-known voice actors among the cast. Reading the interviews you can feel just how excited they’re about their roles. Especially Masakazu Morita who plays Barnaby sounds like a total fanboy whenever he talks about his role – and for a good reason because it’s really different from his previous works. Kenjiro Tsuda seems to get into his role as Nathan even a bit too much at times. And then there’s of course the real life Keith Goodman, Go Inoue. The voice cast is about as adorable as the characters they play.

In short: You’re doing it right.

Productions take a long time, so it’ll probably be a few years before we see if Tiger & Bunny’s success has left any impact and gotten other series trying to do something unconventional to succeed. It’d be great to see more unusual protagonists like Kotetsu. But Tiger & Bunny just sort of happened so duplicating the formula doesn’t automatically guarantee success.

In the mean time, I’m just going to continue spending my euros on merchandise. (Maybe some pennies will even reach Mr. Satou so he can eat more ramen.) （*´∀｀）

5 comments on “For Fun: The Recipe”