Discussion boards are overflowing with fake spoilers, 60 000 people want to see the final episode in a theater that only has seats for 400 and each remaining week the wait for next episode feels longer and longer. And at the same time I really don’t want this all to end yet.

This episode felt kinda like returning to the first cour with some hero action for a change.

Last week we were left wondering just what the hell was Kotetsu planning to do to return the memories of the rest of the heroes… And what he does is just so Kotetsu.

Kotetsu’s big plan of how to return the memories of the heroes involved mainly striking one of his dorky poses while in the original Wild Tiger suit and asking if they remember anything. Yeah. This caused much facepalming and our initial reaction was pretty much the same as Ben’s. It would have been pretty epic if his plan had actually worked. (And just for the record, seeing the original Wild Tiger suit is making us very happy. We love it!) Returning memories isn’t as easy as it looks, and only Blue Rose who Kotetsu had already tried to convince once started to have second guesses. Getting some random facts on the heroes was interesting it its own way, though one has to wonder what Nishida was thinking with the whole fried eggs and Keith thing… The situation was starting to look pretty bad before Kaede arrived at the scene.

If there’s something about the writing in Tiger & Bunny that keeps bothering me, it’s the scenes involving Kaede. Not because Nishida can’t write her, but because of how her character is utilized. Just like when Kotetsu went back home to see her and the storm happened, her part in the story is again a huge plot device and a forceful nudge to keep things moving. I get why her involvement in restoring everyone’s memories was necessary 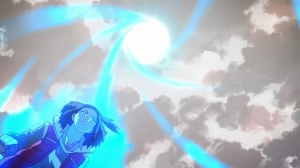 – when Barnaby’s memory of the day his parents were murdered started cracking, it took a good couple of days and some extra proof for him to regain it. There just isn’t enough time and Kotetsu is cornered enough as it is. Also, Kaede restoring the other heroes’ memories allows the story focus back to the main characters and provides more proof against Maverick. It seems like her copycat power really is unique, because the other heroes seemed very surprised about it. No one commented on the strength of her power, so it’s a safe bet that a newly awakened NEXT is often unstable with using the power.

We do feel a bit sorry for Kotetsu, because he’s surrounded by strong women. His mother certainly is one, Tomoe seemed like one, and just look at Kaede telling him off. In that light it’s easy to understand why he wants to avoid conflict.

The whole sequence of Kotetsu luring Barnaby to chase him and especially the highway part were a huge nod to American action movies. The freefall and wirework off the Apollon Media building were great. The expected “unexpected team up” of Ben and Saito didn’t happen at least yet, and it’s possible that the spoiler was fake. Whether Saito was out of it and just thinks that whoever is in the Wild Tiger suit must be Wild Tiger or whether he actually remembered Kotetsu is up for interpretation.

sted to “pay close attention to Tiger’s sidecar” and they came true. The sidecar transformation sequence is definitely my new favourite scene along with the first Good Luck Mode from episode 5. Even director Satou himself seemed very enthusiastic about it on Twitter, mentioning that he’d confirmed with the CGI director that it was possible to make it look smart in one cut before he storyboarded it. I have watched the scene countless times already and I can’t get enough of it. (I admit, I love flashy special effects, and this was one of the most awesome things they’ve done with CGI in Tiger & Bunny so far.) Overall the bike chase was expertly directed and a joy to watch.

We’re not sure what Kotetsu is going to do to make Barnaby’s memories return, considering his… rather special plan with the other heroes. And returning memories may come with side-effects, the previous time Barnaby woke up from Maverick’s mindrape he had a breakdown. Distance between people is a very important theme in the show as director Satou mentions in an interview made before the 2nd cour started, and the gap in the draw bridge in the end of the episode could well signify the current distance that’s grown between Kotetsu and Barnaby due to all the misunderstandings and Maverick’s interference. It’s something they have to fix together. That’s also why having Kaede return Barnaby’s memories would have been not only too easy but also bad writing. You can tell Kotetsu is serious, because he’s not calling Barnaby “Bunny”, but using his name instead. As far as I recall, he’s only done that during Barnaby’s fight against Jake.

And inside Dark Tiger is…

Our guess is still that Dark Tiger is an android. All the heroes seemed pretty surprised when Sky High wrenched the visor open, so options are:

Considering the sounds the Dark Tiger suit makes when it moves, we really doubt there’s an actual person inside it. Rotwang was pretty crazy, so even though Cis was his magnum opus and supposedly the most advanced android, we can’t dismiss the possibility that Maverick could have gotten a hold of his research and put some less crazy people to develop it further. Maverick seemed to have great expectations for Dark Tiger, so there’s probably some hidden gimmick in him. The preview also shows more of Dark Tiger, but it could be a flashback to before he went up to the roof to confront the heroes.

No spoilers can be trusted right now. The preview doesn’t really give much to go on. Who knows what next week will bring, and although the title is a downer, it’s uncertain who it spells doom to. Considering how displeased Maverick seemed and the appearance of Dark Tiger to draw the attention of heroes, we fear that Kaede might get kidnapped. Maverick now knows that she’s Kotetsu’s daughter and we think he’s probably getting desperate, especially if Barnaby’s memories return and Dark Tiger is defeated.

Possibility of supplemental speculah along the week is at all time low, too, since there was mostly just action this week and nothing much to speculate on. Until next week, see ya!