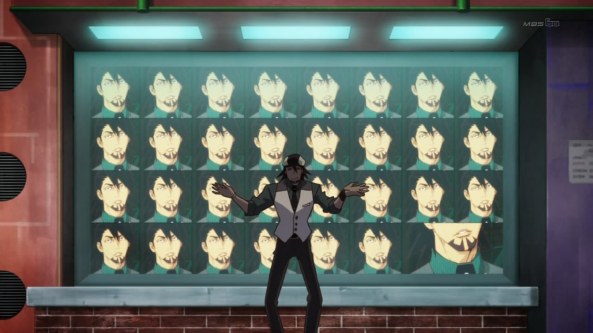 Whaddaya know, this week wasn’t as much suffering as expected. No complaints, and some sweet hero action for a change! (And animation-wise this episode looked really good, too!)

21. Heaven helps those who help themselves.
-天は自ら助くる者助く-

Sometimes Kotetsu makes us worry by exhibiting his tendency for not being the sharpest tool in the shed. But when it counts, he can act so cool. And today was one of those days.

The amount of property damage inflicted when Kotetsu was dodging the other heroes surprised me. We’re used to Wild Tiger being the one wrecking things, but Sky High demolished the most this time. It could be he was just going all out since we wouldn’t be surprised if there’s extra points in them for catching the “murdere”. Regardless, Kotetsu seemed to get through to Blue Rose just a bit. She did hesitate, but the arrival of Dark Tiger along with Fire Emblem interrupted them. From what Blue Rose said it seems that Maverick changed Wild Tiger’s real identity so not even the other heroes know his name or face – a pretty smart move on his part to stall things.

As for Dark Tiger, we’re pretty sure that thing is just a machine, programmed with Wild Tiger’s mannerisms. The movement seemed sluggish and someone might be remote controlling the suit. (It’s pretty impressive how Kotetsu fights Dark Tiger without using his Hundred Power, which was probably on cooldown.) Notable is also that the Dark Tiger suit has no sponsor logos (and neither does Barnaby’s new suit which we see later), which sort of indicates that they are not the “real” ones – and villains don’t have sponsors anyway. If Dark Tiger suit is indeed remote-controlled, it’s possible that there’s a similar mechanism built into Barnaby’s new suit, allowing someone to override his 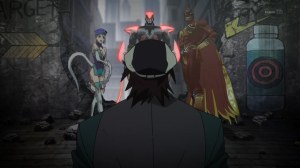 actions if needed. It’s possible that Maverick doesn’t trust 100% that Barnaby will get the job done, especially if his intention is to get Kotetsu killed during the chase.

How does Dark Tiger fit into Barnaby’s memories, then? Before Maverick changed his memories, Barnaby’s mind was literally full of Kotetsu. (Even Barnaby’s VA Masakazu Morita made a comment about his clinginess in one of the recent interviews.) If Dark Tiger is some sort of android, talking clearly isn’t their forte, because Cis – which was supposedly a very advanced model – could only use a few words, although pretty logically. If Doc Saito or someone else is remote controlling Dark Tiger, he might do the talking. It’s also possible that Barnaby now has the memory that Dark Tiger is actually a machine and it’s being done as some sort of publicity thing – but Blue Rose’s words to Kotetsu contradict this. Whatever Barnaby is thinking, his mind is probably a pretty finely balanced mess at the moment.

So who’s this guy Thanatos, anyway?

Everyone had great expectations for Yuri, even as far as to him teaming up with Kotetsu. He probably disappointed people who wanted that, but we don’t see it in his character to “team up” with anyone. He did his fair share by allowing Kotetsu to escape from Dark Tiger and the other heroes, and the only reason he even did that was 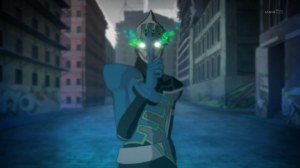 because he realized that Kotetsu was being framed. Besides, this episode’s title clearly points to Kotetsu having to help himself to receive help along the way. He didn’t stay wringing his hands but chose to act – and help he did receive.

Maverick must think that he has the entire jurisdiction system on his side, since he doesn’t seem concerned that someone in the Department of Justice would start suspecting. Or maybe he just thinks that he can rearrange the memories of whoever speaks up? And he doesn’t seem to know Lunatic’s true identity, since we weren’t shown any reaction from him to the intervention.

And as an amusing detail about Lunatic, keep an eye on the magazines Kaede flips through after finding out her father’s secret. (Yuri probably added extra honey to his tea as a reaction to the magazines spinning lies like that.)

Kotetsu seemed so relieved when he saw on TV that Barnaby was alright. The same TV broadcast also finally made him start connecting the dots and to figure out what was going on. It was also fine proof of how media in Sternbild acts, because they didn’t bother looking up details on Samantha until Maverick revealed she was like family to Barnaby. That line about “Barnaby having his mind set on

revenge” really stung me, thinking of how happily he talked about living for other things than revenge in episode 15.

As for Ben, he seriously gave us a heart-attack at first when we thought he might have been brainwashed with the rest. I don’t think Maverick thought that Kotetsu would still be in touch with his old boss, because Maverick seems like that type to just use people as long as it’s beneficial to him. Running into Ben was the turning point in Kotetsu’s luck. Not only did he get his original Wild Tiger suit back, I think talking to Ben also helped Kotetsu arrange his thoughts on the whole thing and to come up with a plan. How he intends to achieve making the other heroes remember the real Wild Tiger, we have no idea. Kotetsu tends to act on instinct but he can come up with amazing things when under pressure, like we saw during Barnaby’s fight against Jake. 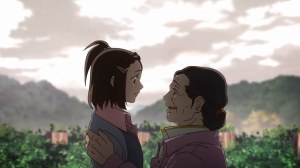 Kaede finally found out her father’s secret. She’s a pretty perceptive child, she would probably have figured it out soon anyway. Under all circumstances, I think she found out in a good way, and her faith in her father was also very touching. I think that she’ll be more understanding about Kotetsu’s shortcomings as a father now that she knows. It doesn’t excuse all those missed visits he promised her, but at least she’ll know why he missed them.

It was pretty predictable how Kaede ran away from Oriental Town to go look for her dad in Sternbild. She seems to be as headstrong (and impulsive) as her parents. And of all possible people, she ran into Maverick. We were both shaking our fists and screaming at the screen in the scene where they met, especially when Maverick patted her head. Now, Maverick probably knows Kotetsu has a daughter but it seems he doesn’t know what she looks like since he didn’t recognise Kaede – or he just doesn’t see Kotetsu’s family as a threat. He’s probably on a power trip right now, and thinks he’s 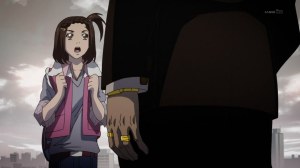 invincible and that Kotetsu’s as good as dealt with. Kaede was also pretty smart in saying she was looking for Barnaby. Now that she knows her father actually works with Barnaby, the wisest thing would be to try to contact him – she just doesn’t know how bad the situation is for Barnaby.

So what about Kaede’s possible copycat powers? Thing is, we don’t actually know how her power works. Even if she did copy Maverick’s power when he patted her head, she might not know how to use it – not to mention that messing with someone’s mind when you don’t know what you’re doing is pretty dangerous. We don’t know if she can retain powers she copies and have more than one copied power in use. It can be used as evidence against Maverick that she has the power, if she manages to keep it and figures out where she got it from. We’d rather she didn’t have to use it, and even if she does it’d be best she does it out of her own choice and not because someone tells her to.

We could be totally on the wrong track here, since so many spoilers seem to have double meanings. But let’s look at two of them that seem to have made some people jittery with implications. First, producer Kazuhiko Tamura said in an interview that “…[Barnaby] will be learning from him [Kotetsu] what does it mean to ‘be a hero’.” Secondly, there’s a spoiler that’s been going around, saying that “a ‘Hero’ will die” and we also know that it won’t be Kotetsu or Barnaby. 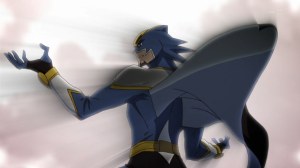 That first one especially has worried many, since all too often someone being heroic leads to their demise. To be honest, that’d feel cheap and we think this has a different meaning. If you look at what Kotetsu did in this episode, he used his Hundred Power only once. He took on Dark Tiger with his own, human strength. We think that what this whole “what it means to be a hero” means that Kotetsu will show Barnaby that you don’t need NEXT powers to be heroic. Kotetsu’s idea of what being a hero means is very different from Barnaby’s to begin with – for Barnaby it’s all points, points and more points with some publicity on the side. Kotetsu wants to help and save people, and the person he most wants to look up to him is his own daughter – whether or not he has his power. This also leads to the “a ‘Hero’ will die” spoiler. It’s of course very possible that the spoiler means that Dark Tiger will die (or be demolished if it is an android like we think) but it can also mean that Barnaby’s idea of a hero will “die”. In episode 19 it was very obvious from the interview that Kotetsu saw in the bar that Barnaby really looks up to him. When Barnaby remembers and realizes everything that’s been going on, he’ll probably be more than willing to adopt Kotetsu’s view.

We really hope we’re at least partially right with this because if we are, it’ll be glorious. （ ´∀｀）☆ And we’re really looking forward to next Saturday now! The green Wild Tiger power suit makes a return in the preview, and there’s also a scene with the bikes. Some spoilers have told us that Kotetsu will come up with a very Kotetsu-like solution to the situation, and suggested to keep an eye on Tiger’s “sidecar” so the bikes might be closely involved in making Barnaby remember. Personally I hope Barnaby’s memories will return soon, there’s still a lot of work ahead to catch Maverick, and the upcoming episode titles aren’t all the brightest rays of sunshine. (Though we think that episode 23 title might actually refer to Maverick, not our heroes. Maybe some backlash will finally reach him.)

Supplemental speculah along the week, as usual. Oh and don’t forget that Tiger & Barnaby’s character song CD comes out on Wednesday!