Instead of fretting about what’s going to happen to Ivan, I decided to channel my nervousness into something good while I wait for tonight’s episode to air. I saw some comments on Twitter dissing Nathan and thought “that’s totally not cool”. Because I think that he’s an awesome character in a lot of ways. But I ain’t gonna lie, the first time I saw Fire Emblem I thought “this guy can’t be for real”. He’s not the type of character you’d expect to see in a superhero show, but part of what makes him so amazing is how he breaks many stereotypes. (Someone might be mean and say he’s just there to divert attention from Kotetsu and Barnaby’s lovestory of the century. If so, he’s not doing a very good job at that.)

If I start with the obvious, Nathan is black. How many of you can name a black superhero without having to think about it for a while? (I couldn’t, I had to resort to googling it.) There are quite a few, but not many that have been titular characters in movies for example. Nathan is also a very successful man, he has his own company. Helios Energy sponsors him as a hero and at the same time, he owns it. Running a business is not very unusual among superheroes, everyone knows that Bruce Wayne (Batman) and Tony Stark (Iron Man) own big companies, too. But being a successful black man he breaks some stereotypes about how black people often are depicted in fiction. Speaking of Batman, Nathan has a lot of things in common with him. The suit designs are similar, he’s got a car that looks like a cross between F1 Ferrari and Batmobile and he’s a damn good driver as they comment in Hero TV.

Moving on, the second most obvious thing about Nathan is that he is gay. The view on homosexuality in Japan is different from the Western view, though it’s common for people to hide their sexuality if it differs from the norm. I’m not gonna go deeper into that issue right now, it’d turn out way tl;dr (and Aki’s reading a book about homosexuality in Japan throughout the history so it’s more her field). So called “okama characters” (men who dress up as women) aren’t uncommon in Japanese media. If I think of the American view, homosexuality is less accepted among the blacks but this has more to do with religion than anything else. Again, Nathan doesn’t fit the usual mold.

Those who don’t know Japanese may not have noticed it so early, but Nathan’s speech pattern is feminine. In Japanese there are big differences in how men and women speak, not just in what pronoun they use when talking about themselves. Nathan is biologically male for all we know, but his gender identity is female. 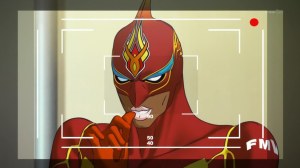 Fire Emblem: He’s a cute kid. He’s the perfect new hero. He’s got a pretty face, so he’s got to be popular with the ladies too. Especially with the ladies…

He’s not talking about just any woman in this scene, he’s talking about himself. And just watch the “pass the baby” scene in episode 9 where Barnaby suggests a woman try calming the crying baby. Nathan’s eyes literally lit up. The way he dresses is over the top and flamboyant (the vest he likes to wear on his free time sparkles more than Edward Cullen in direct sunlight!), but he doesn’t choose his clothes and makeup to show off he’s gay – although his clothes are gaudy and tacky, they’re also feminine and underline his identity that way. 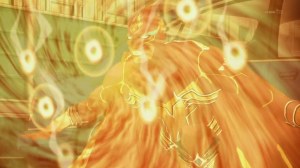 But back to superheroes. If you have been paying attention, you’ve noticed that this guy is pretty damn BADASS. He can stop bullets with his fire. He can melt steel with his fire. Even his cape is on fire. (Stare at the cape for a while, it’s hypnotic like live fire.) He’s confident, and I think the only time he’s been truly taken by surprise was in episode 6 when his fire was overpowered. He’s also smart, and emotionally intelligent, which makes him possibly the best judge of character among all the heroes. Lately he seems to enjoy especially watching Kotetsu and Barnaby. It’s not hard to notice Kotetsu’s bluffs, but he seems to be the most tuned in to what goes on between those two. All the characters get their share of being a comedy relief, but the show makes very little fun of Nathan as a gay man – the joke’s more on others and Antonio seems to have ended as a butt of many of them. (“Your butt always feels nice.”)

Best part is, the other heroes do not mind the slightest how different he is. Kotetsu most of all is completely unfazed when Nathan suggests spending a night with him, and just makes a comment about his arm being too hard for a pillow. First and moremost, he is a hero and someone the other heroes value as a friend and a rival.

All the heroes have traits that break usual character stereotypes, but in Nathan they stand out the most and it makes him a truly awesome, unique character. I really hope people can see him as one, not just a gay black man who acts girly and dresses in red tights.

6 comments on “Nathan is an awesome character”