Tiger & Bunny was featured on morning TV in Japan the other day, and new footage of the movie was shown. The theme song for the movie “Linear Blue wo Kikinagara” will be performed by UNISON SQUARE GARDEN who also performed the first opening “Orion wo nazoru”. The new NEXT appearing in the movie is called Robin and he’ll be voiced by Yamaguchi Kappei.

The new Cinema★Cinema magazine features Tiger & Bunny movies, and there’s information also in other new magazines on the movie.

From this month’s Otona Animedia’s interview with Yonetani: 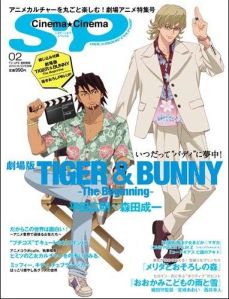 If you experience lust for the Cinema★Cinema magazine, I found it at least at CDJapan (though their rates for magazine shipping are horrible).

And totally unrelated, but I got my copy of KING OF WORKS and I’ll see if I can get a review together this weekend with plenty of pics!