The Spring 2012 anime chart is pretty complete already. There isn’t that much that tickles our fancy on the list, except for one title… And this isn’t directly Tiger & Bunny related, but close enough. T&B’s original character designer Katsura Masakazu‘s manga ZETMAN is getting a TV anime which starts in April. 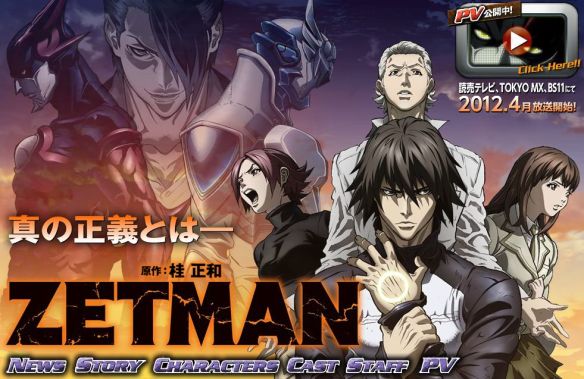 Although we are really excited about this, we have some reservations.

Technically it looks pretty good, but the scenes don’t really connect. The colours look gritty but that’s fine considering the source material. I’m looking forward to see all those scenes animated. Aki hasn’t read the manga (and she doesn’t want to be spoiled), so here are her thoughts on the PV:

My first three thoughts were: a) great suit design (though I suppose that’s all thanks to Katsura) b) this video gives you this impression that the anime will have some nice and fast-paced action scenes and c) I like how different it feels from Taibani, since it is usually colorful and feels very “alive”, while Zetman goes the dark and edgy way. But I don’t think it’s the “bad” dark and edgy, I think they might actually pull this off and be more on the side of “epic dark” and not “emo dark”.

The cast choices seem pretty good to me. I’m a big fan of Namikawa Daisuke so I was happy to see him cast as Jin and I think he’ll be great for the role. There are a couple of familiar names from Tiger & Bunny among the cast: Kusunoki Taitem, Ise Mariya, and Yusa Kouji. Yusa especially seems like a great choice for Haitani’s role. Hanazawa Kana seems a bit typecast as Konoha, I hope she doesn’t end up annoying me.

More about what we actually wind up watching sometime later when the series have already started. I think we’ve dropped like over half of the series we started watching in the current season, so we filled some of that spare time by watching Maou (episodes 4-11 written by Nishida Masafumi). It’s good, by the way. We haven’t seen the original Korean drama that it’s adapted from so we can’t say how it compares, but it is definitely worth a watch. Like Aki said, it’s more serious than the usually goofy Japanese dramas, so even if you’re normally put off by them we’d recommend giving Maou a chance. The writing is great, and the acting is generally very good – only Ikuta Toma should lay off the caffeine since he’s over-the-top hot-headed most of the time. (Just remember to bring tissues if you decide to give it a try.)

17 comments on “So Who’s Going To Watch ZETMAN?”