Although this doesn’t directly concern Tiger & Bunny, this will probably interest the fans! 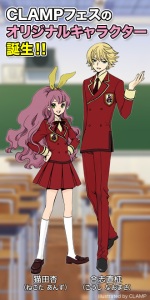 CLAMP Festival 2011 site announced that Tiger & Bunny’s director, Keiichi Satou, will be in charge of the new anime feature specifically made for the event, with new characters designed for it.

The new characters are featured prominently on the Festival site but other than that there’s not much information yet. (source)

(I’m not a huge fan of CLAMP myself though I used to be once. Still, I’m interested in seeing this.)