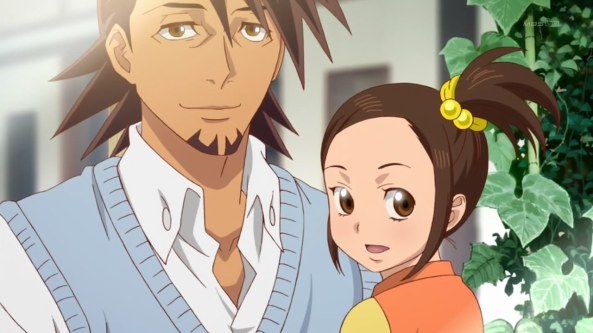 Since there’s a small uproar about Kotetsu making this list of bad anime parents on ANN, I wanted to add my own two cents to the mix. This was supposed to be a part of the post I’m writing on Kotetsu, but I’m not gonna post that until next episode has aired.

This topic is brought up every now and then and many people diss Kotetsu for being a bad parent and never seeing his daughter. Personally, I disagree. He keeps constantly in touch with Kaede and tries to be a part of her life even though his work always gets in the way. Also, I think there’s a little cultural clash going on here. I can speak only from my own experience of the time I lived in Japan, but it’s still fairly common that fathers have to stay away from their families because of work. It’s not because they’re bad parents, it’s the Japanese work culture, and they’re still providing for the family. Coming from a Western background I had some trouble coming to terms with this and how for example the mother of my host family was fine with her husband working abroad for months at a time (in fact, I only met him once during my stay). Kotetsu is living in a situation that the original target audience – 40 year-old males – he was designed to appeal to is familiar with. He obviously cares about his daughter very much, but his work as a hero is also important to him, and it’s his way to provide for her and keep her and the world she lives in safe. All the times Kotetsu has missed the meeting with Kaede have been because of situations beyond his control. It doesn’t justify that he’s had to let her down so many times, and it’s hard for Kaede to understand why her father keeps doing it when he can’t tell her about his job. But Kotetsu tries his best with what chances he has and you can tell he wants to see his daughter more often.

This was also mentioned in the partially cut out section of the interview where producer Tamura talked about Kotetsu’s brother. The bits we could read said that Kotetsu fears Kaede might be attacked by people holding a grudge against him, and having her live with him would put her in direct danger. He wants Kaede to stay away from all the hero business.

I think that the person who compiled the list has failed to understand Kotetsu’s character. Not to mention putting him on a list of “parents you’d call the child services on” is sending a totally wrong message. Would you like to have had child services called on your parents when they had to work hard to provide for the family when you were a child? There’s no indication that Kotetsu’s actually making a lot of money despite his popularity having gone up after teaming up with Barnaby.

This is my personal opinion and you are free to disagree with me. My thinking may be a bit more mature since I fall into the original target audience age-wise, and even though I don’t have children of my own, most of my friends and all my siblings have children. Parents sometimes have to make hard compromises for the good of their children, decisions that may be difficult for the children to understand but those decisions don’t make them bad parents.