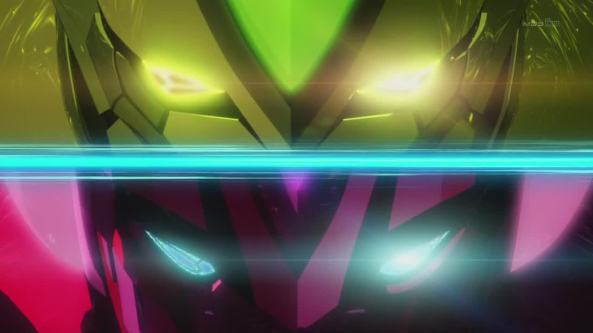 Like I mentioned in the episode 14 post, new opening and ending songs premiered. They’re similar in style as the first set of songs and both are performed by new artists. This is also going to be the post where I finally throw my hands in the air in resignation. It was a personal challenge for me to not let my fujoshi show and not talk about all the gay text in the series but even the new opening and ending sequences both show that the series creators are pairing Kotetsu and Barnaby. Truthfully, maybe my challenge was silly now that I’ve been reading comments about episode 14 – it’s really hard to be blind to how these guys are acting around each other. Even my straight male friends are pointing it out to me.

Anyway, click the cut and let’s take a look at these.

NOVELS are an indie rock band. I hadn’t heard of them before they were announced as the new opening artist, but their sound is similar to for example ROOKIEZ is PUNK’D. There are no official lyrics around yet, but from what we can hear they seem to fit the main characters. 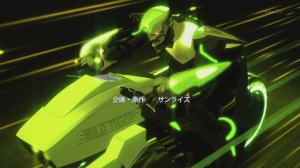 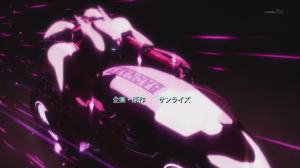 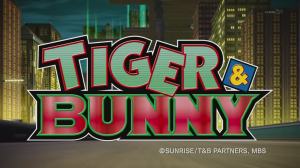 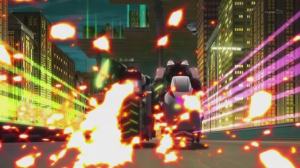 The opening sequence itself has a nice feeling of movement, starting off with Wild Tiger and Barnaby on their bikes which then combine and they drive on together. After that Kotetsu, Barnaby, Karina and Antonio present their sponsors along with new character art by Masakazu Katsura. 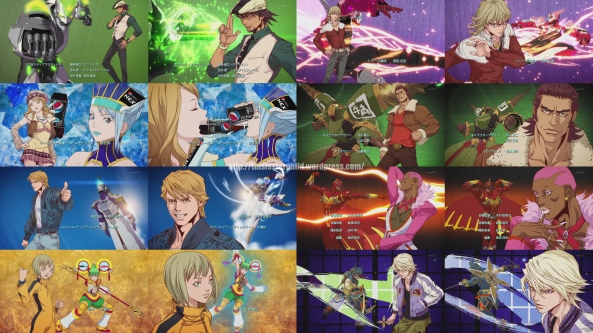 After Antonio, the camera switches for a while to Kotetsu’s cellphone. It’s held in small hands so the only one who could be holding it is Kaede (confirmed by the director on Twitter). She’s looking through the pictures saved there. 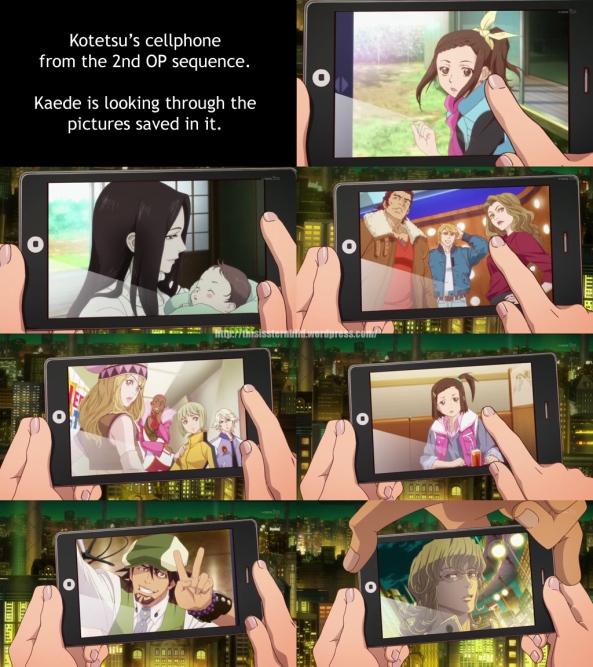 The order of the pictures appears to be family (Kaede, Kaede’s mother), coworkers (other heroes), new family(?) (again Kaede, Kotetsu himself, Barnaby). The last picture we see before Kotetsu takes his phone back is of Barnaby, with a background similar to what is shown behind the phone. It leaves an impression that the picture was just taken and they’re all three together somewhere in nightly Sternbild. 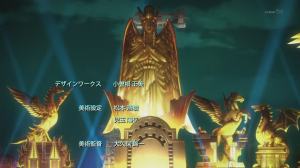 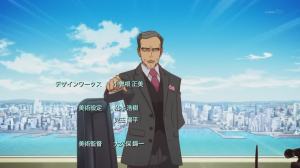 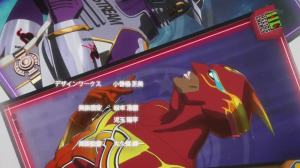 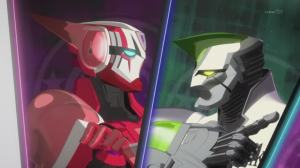 After that we’re shown a pan of Justice Tower in the middle of Sternbild. Then the camera briefly cuts to Alexander Lloyds and from there to what seems to be a set of hero cards. Then the rest of the heroes (Keith, Nathan, Pao-Lin and Ivan) present themselves and their sponsors. Ivan/Origami Cyclone’s presentation is almost comical since he’s gained three new sponsors – living up to his nickname of “walking billboard” with a total of four sponsors, more than any other hero. Nathan/Fire Emblem has also gained an additional sponsor, and now has Animate logo on his other shoulder.

It seems that Lunatic will play a major part in the remaining episodes, at the end of the opening he’s show in the receiving end of a Good Luck Mode attack. But this doesn’t mean that there won’t be other villains, because Ouroboros didn’t show at all in the first opening even though they were the true villains of the first half of the series. 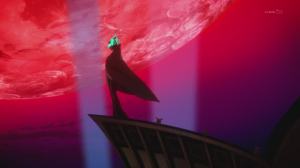 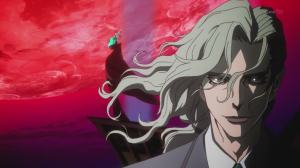 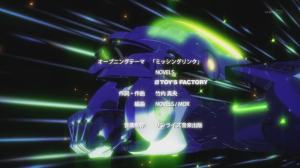 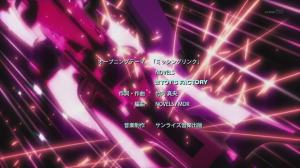 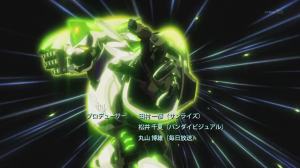 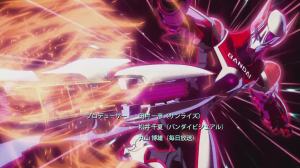 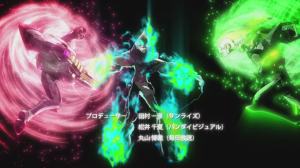 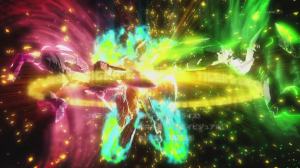 Finally, the new opening ends with a group shot of the main characters, just like in the first opening.

I was pleasantly surprised by the sound of this new song by Tamaki. Although somewhat melancholy like the other songs by her I’ve heard, MIND GAME has a bit more power to it. Probably not something I’ll have on my playlist all the time (like MISSING LINK which is going to be on loop once the single is out), but not a bad song at all.

The graphics are much simpler and muted than with the first ending sequence, showing the main characters on a background of their lines from the first half of the series. 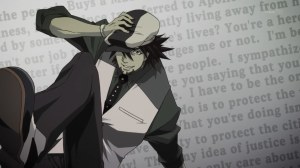 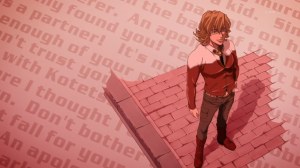 Kotetsu and Barnaby’s pictures switch in a puzzle-like animation, piece by piece. I find it hard to believe that this would be a coincidence. The way they overlap in the shot makes it look like they’re holding hands. (Just for the record, there’s no way these were coincidences, either.)

The rest of the heroes’ pictures switch with sweeping animations, I tried to get caps without credits so the text would be legible, clicking on the images will show them full size. 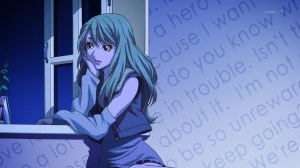 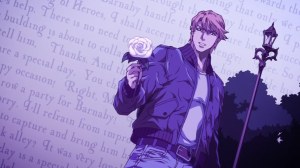 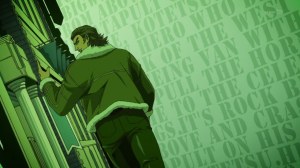 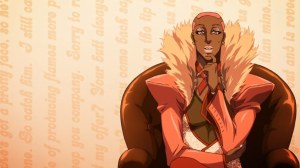 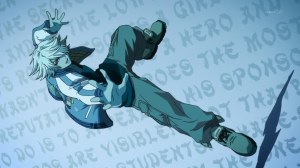 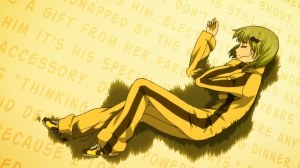 There isn’t much more to say about this sequence, since it mostly just focuses on the characters. In the end, everyone’s shown in a group photo (including Keith’s dog!) and Ivan has made it out of the background. 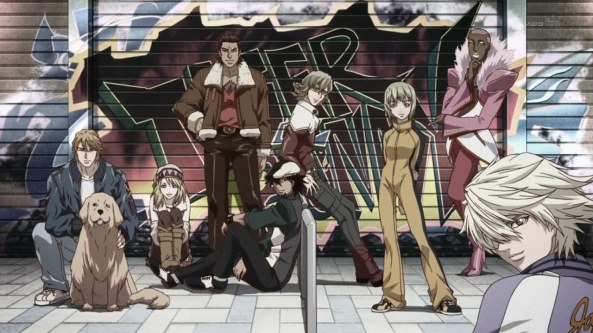 We know the producer’s comment on the first ending, it would be cool to find some comments on the new opening and ending in some interview now.