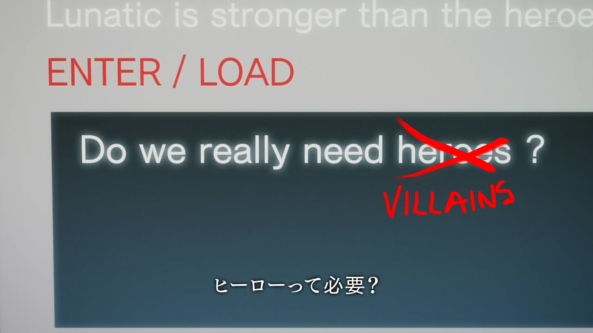 So far we’ve seen several NEXT criminals, but only three had any impact worth mentioning. Lunatic is more like a rogue hero, following his own code of justice. Jake Martinez was really only Barnaby’s nemesis but he and Kriem had a good shot at being the arch nemesis for the rest of the story. At first I was a bit surprised to see how quickly they were dealt w 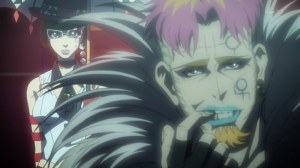 ith. I didn’t really get to Jake’s demise in my post about episode 13, partially because I hadn’t had enough time to think about just what exactly happened to him. It’s still possible the Ouroboros story continues on the second half of the series to keep the plot moving, and I really doubt we’ve heard the last of Jake. He uses barriers, so somehow he could have survived. It’s unclear if he really even was the man Barnaby had been after for 20 years, because there are several hints that speak against Jake being involved in the deaths of Mr. and Mrs. Brooks.

I talked about the popularity of Tiger&Bunny before and I think the reason why the villains don’t get such a huge spotlight has to do with some of the things I mentioned. Although Tiger&Bunny looks like a shonen anime and Viz profiled it for 14-25 male audience in the USA, you have to remember that it wasn’t aimed at your typical shonen demographic in Japan. The goal was to reach the 30+ audience who are more interested in Western media and may not have watched anime for a while. You do not reach that target group by going pure shonen, which is basically what the showdown against Jake was. To me it felt a bit out of place in the series after what’d I’d seen so far. Even though there’s action and other usual superhero elements, more than anything Tiger&Bunny is driven by characters and their relationships. Even the plot on the first half was overshadowed by the characters. I really do enjoy that aspect and I love all the characters but there were times when I wanted some more plot development. The fact that the entire Ouroboros attack only spanned for four episodes and at the same time had a major focus on character relationships and development

proves this. It’s typical in shonen anime to drag on fight scenes and most of character development is actually “power development”. By doing that with Tiger&Bunny there’s a risk losing the interest of the more mature audience who don’t want to watch several month long battles.

I was watching the promotional video for episode 14 which is also the lead up to the second half of Tiger&Bunny, and I noticed the lack of a defined villain. Lunatic is shown briefly, but I really couldn’t tell what kind of encounter it’ll be. Instead of focusing on fighting the bad guys, the promo was mostly about the heroes themselves. We hear Barnaby talk about how his view on life has changed now that he doesn’t live for revenge, and Kotetsu asks if he’s being told to quit being a hero. The text blurbs briefly mention “new problems” as well as “despair” and “hope”. There’s not a word of new powerful adversary, which leaves me with a feeling that the second half will be just as focused on characters as the first – if not even more so. At this point, trying to turn the series into more action focused might actually cause a drop in viewers.

Does the series actually need a prominent villain and an arch nemesis? Not if it’ll cause it to turn into another shonen battle showdown, and I really hope they won’t do that. So far in Tiger&Bunny the character development has been natural and incredibly well written, and I think that’s what the people who are watching it find the most attractive about it. No doubt there will be new villains and some old ones will turn up again, but direct conflict with them is not what keeps the series afloat.

One comment on “How much do we need a villain?”