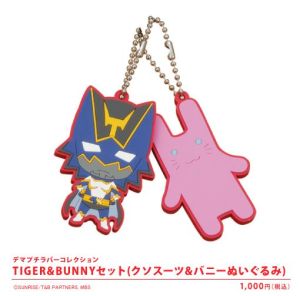 Tamashii Nation 2011 site has some Tiger & Bunny items as exlusives only available at the event. The blue and purple see-through Sky High superdeformed figures are items given away with the tickets; blue ones when you buy your ticket in advance through e+ and purple ones with tickets bought at the event.

In addition to the Sky High figures, there is also event exclusive, commemorative Deformeister Rubber Collection charm set with Tiger’s crapsuit & Bunny plushie. I’m guessing that “crapsuit” is now an official name for Tiger’s original blue suit since the official tweet announcing them also used it.

And Go Inoue (aka. Go-chan aka. the Real-Life Keith) mentioned on his Twitter that he would like to get those straps too, and that Director Satou was the one to design Tiger’s crapsuit and Mr. Legend’s hero suit. (He also said that Satou is probably grinning widely every time he sees “crapsuit” written somewhere.)