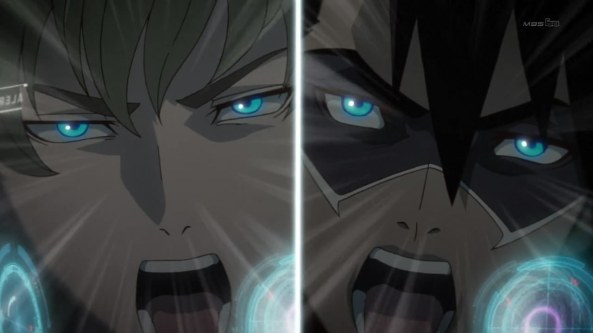 Tiger & Bunny is still stingy about how much important information it lets through to the audience, but this time we got something new to feed the speculations again. Click to find out what theories we’ve cooked up. (Complimentary mayo available if you happen to be in the Kotetsu school of condiments.)

NEXTs started appearing 45 years ago. But what caused this? It could be either a natural mutation or caused by something artificial being introduced to the population. At the moment we’re leaning more toward the “something artificial” explanation. It’s possibly something that only a certain few people react to and evolve into NEXTs. The different powers may even be explained by different substances causing them. Sternbild isn’t the only place where they appear – Pao-Lin isn’t a native and the producer said that Kotetsu isn’t originally from Sternbild, either.

NEXT powers manifest at wildly different ages. As much as they tried to distract us with the swimsuit photoshoot, the interview revealed an important piece of information: Barnaby had his NEXT power when he was only 2 years old. Keith told Cis he became NEXT when he was 18. Kotetsu tells Tony in episode 2 that he became one when he was around his age. So far we’ve been assuming Tony was the same age as Kaede, but it’s very possible he’s a few years older. And this lead us back to…

Kotetsu and Barnaby share the same NEXT power. According to series timeline, Barnaby is about to turn 25. This means he got his power 23, maybe even closer to 24 years ago. We still don’t know Kotetsu’s actual age, but if the estimate of around 35 is correct and if we give a few years of leeway for when he became NEXT, it’s actually possible that they have the same power because it awakened at the same time. If the “something artificial” theory is correct, they may have been exposed to the same substance. Also, Barnaby’s parents knew he was a NEXT. This may be important if our previous speculations are still valid.

NEXT powers can change. Ben tells Kotetsu that it’s an extremely rare case that a NEXT gradually loses their power after first having it boosted. But at the same time, Jake Martinez had not one but two powers. We’re not going to read anything to the glow color right now, since Kriem glowed orange-ish, too. After seeing some of the changes they’ve done to the BDs, it might be that her glow was the wrong color. Maybe Jake went through the same, but instead of losing his first power, it was diminished in favor of his second power? If NEXT losing their power is so rare, a power boost like this should be even rarer and it could have gone unnoticed if Jake was in prison while it happened.

Back to Jake and the case of Barnaby’s parents.  Mind reading may have been Jake’s first NEXT power. That would explain why he used a gun to kill Mr. and Mrs. Brooks, unless he was trying to frame someone. Jake was described as a very dangerous NEXT, and mind reading would be enough for that even without the barrier skill. Keeping a mind reader like him under wraps makes sense because he’d be terrible if he got out and allied himself with the right (or wrong) people. The range of his skill doesn’t seem very big, since he couldn’t read Kotetsu’s thoughts while he was standing on the roof of the stadium in episode 13. We think it’s possible his original mind reading skill was much stronger but instead of losing it completely it lessened when he gained barriers.

We’re pretty sure that whatever research Barnaby’s parents did is going to be relevant for where the plot is going from here. Next episode title refers to digging deep to find the truth and that can apply to both Kotetsu and what’s going on with his power, and to Barnaby and the truth about his parents. (Or something completely different, since these guys seem to love misleading with the previews.)